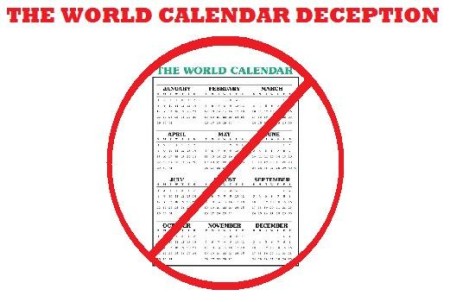 The world calendar has been a topic of great scrutiny and debate for many years. the world calendar movement started many years ago and in recent years has received immense support by many groups promoting a world calendar scheme. Before we delve into the principals and functions of it we have to look at why it is the final deception. If you open your bible and turn to Isaiah chapter 14 we read the following passage below

Isaiah 14:12  How art thou fallen from heaven, O Lucifer, son of the morning! how art thou cut down to the ground, which didst weaken the nations!
Isaiah 14:13  For thou hast said in thine heart, I will ascend into heaven, I will exalt my throne above the stars of God: I will sit also upon the mount of the congregation, in the sides of the north:
Isaiah 14:14  I will ascend above the heights of the clouds; I will be like the most High.
Isaiah 14:15  Yet thou shalt be brought down to hell, to the sides of the pit.

After examinig the following verses closely we find that Lucifer is stating that he would try to exalt himself above our Creator YAHUWAH. He would attempt to do so by setting upon the mount of the congregation in the sides of the north. The important information to take away from this scripture is that in order for Satan ﻿to have worship dictated to him he will attempt to do it via a false calendar because there are no ruling principals in the north. This will be made very clear in the following images below. 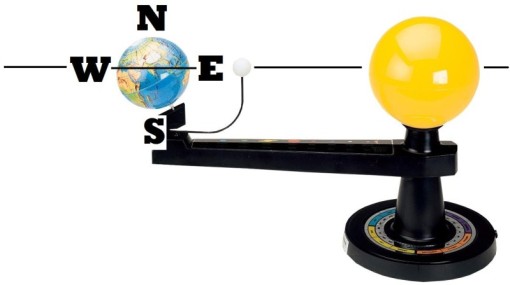 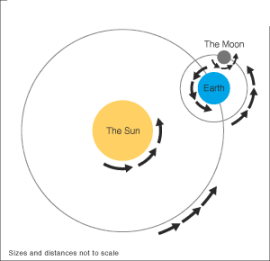 As it is very obvious the ruling principals that Elohim created in Genesis 1:14 are in a eastern-western horizon and have nothing to do with the north. The sun rises in the east and sets in the west. The moon likewise can be found throughout its monthly transit in the very same eastern/﻿western directions but their are no ruling principals in the north on the creators calendar he created. This is key to understanding Satans sly statement that he would sit upon the congregation in the sides of the north. It would be something totally different from the one YAHUWAH created to measure appointted times of worship and function as a calendar. As we examine this information also take into account the following information below.

In todays world we have three calendar formats

SOLAR - A purely solar calendar in which the year is calculated by the sun and the months are calculated by arbertray man made lengths of months.

lLUNAR - A purely lunar calendar in which the year and the months are calculated by the moon.

LUNI-SOLAR - A calendar in which the year is measured by sun while the months are measured by the moon.

The reason the World Calendar is the last and final time keeping deception is because it mirrors the Creators Calendar while at the same time having no part with its ruling principals. This will be demonstrated in the following side by side comparisons and then itemized below. 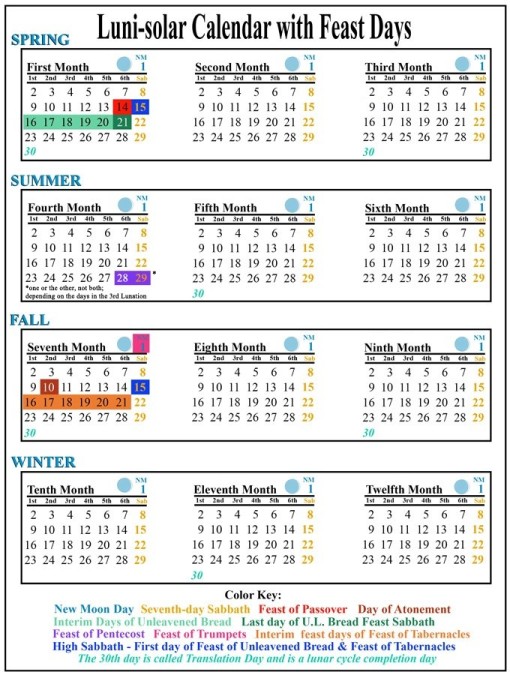 NOTICE (image property of Worldslastchance.com and used for reference only) 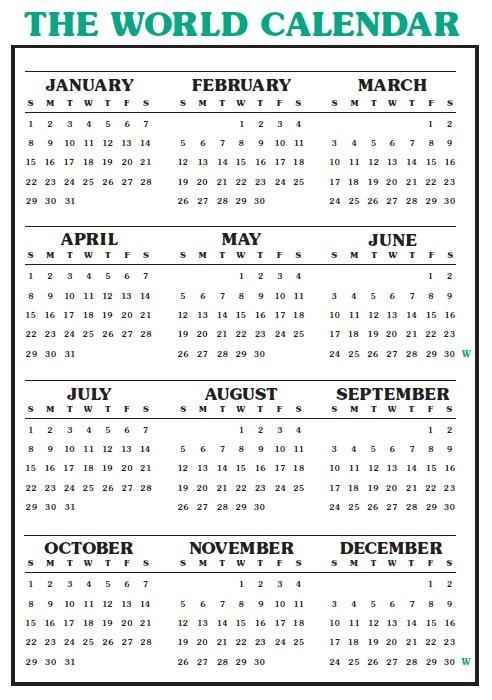 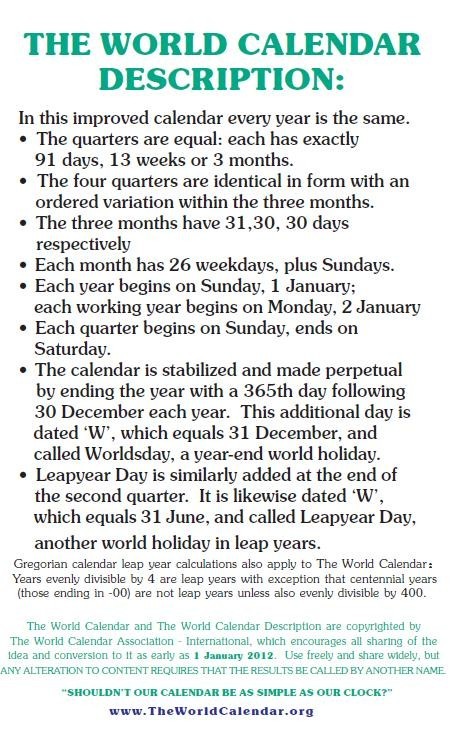 As can be seen the calendars bear striking simliarities as we now will observe. NOTED BELOW IS WHAT THE WORLD CALENDAR COPYS FOLLOWED BY THE TRUE CALENDAR OF YAHUWAH OUR CREATOR AND THE CORRECT WAY OF TIME KEEPING. 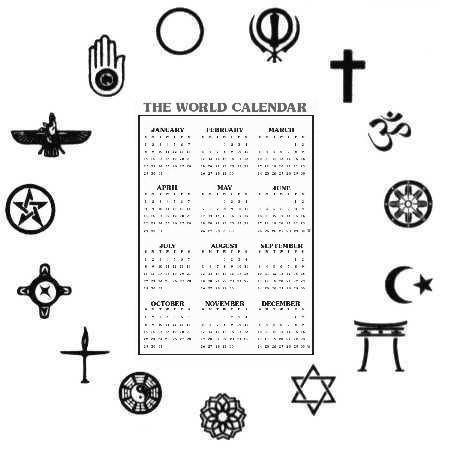 The final product of a World Calendar is so dangerous because it would unify the entire world onto one universal Calendar scheme and worship schedules then would revolve around it. In an example of the evil spirit of globalists and their Lucifirion intentions a letter of appeal for a world Calendar by Daniel Sher was an open letter to Jewish opponents of the World Calendar back in the 1950's and it is a prime example of there intentions.(SPECIAL NOTE THIS IS JUST ONE ATTACK BY WORLD CALENDAR MOVEMENT ON RELIGIOUS GROUP AND WE ARE USING THE JEWISH AS A TWO FOLD EXAMPLE. THIS CALENDAR WILL AFFECT ALL RELIGIOUS GROUPS) In a few exerpts from the letter below will be given with key parts BOLDED in black and with our comments listed in red detailing what the underlying intent of the letter was really saying. The link to the full letter can be found HERE.

Question 1: DO YOU BELIEVE that the overwhelming majority of the human race should be prevented from amending their civil calendar, in order to safeguard a right which is exercised by only a part of the Jewish people outside Israel (a small minority in fact) who claim that they would thereby be inconvenienced in observing certain practices of their own religion in a non-Jewish environment—practices which only a fraction of members of the Jewish faith observe, either in Israel or the Diaspora? If so, do you consider that such an attitude is in keeping with the principles of democracy and justice that have heretofore been part of your own contribution to the development of human dignity and international understanding?

(The letter begins by asking if the overwhelming majority should not be able to keep a new calendar just becasue the minority does not want to. So they are essentially asking you to choose mans ways over our Creator becasue that the majority wants it.)

(In the following question the letter once again reminds the readers that its the majoritys will and that they in a sense should concede defeat to the greater number regardless the religious implications.)

(d)   If the traditionalistic observance of the Sabbath were indeed a matter of survival of the Jewish people, how would you explain the fact that in Israel proper such observance is far from complete and is furthermore confined to a minority?

(The World Calendar movement in this exerpt continues to attack the minority about their beliefs and that the rest of their own people do not as a majority uphold their own beliefs.)

﻿(f)     Recalling that the Jewish Diaspora survived for many centuries before the inclusion of the seven-day week under Constantine in the Christian calendar (A.D. 321), why should the Jews not continue to survive, whether or not the week stays without change?﻿

(This section of the letter was remarkable to read. It details out that not only has there been a Calendar format different to the scheme used today but that it leaves a thought in the mind to further research that there was an 8 day Roman Calendar before the The 7 day planetary week we are so used to today on the modern Pagan Roman Calendar. This is a monumental subject to understand because it is further proof to follow the Creators Calendar and not The Roman one or the coming World Calendar.)

NOTE:THESE EXERPTS ARE FROM THE FINALLY AN APPEAL SECTION OF THE SAME LETTER.

(b)   The allegedly changeless principles which you proclaim as governing Jewish time-reckoning, and especially the observing of the Jewish Sabbath, are themselves questionable on the grounds of both history and physics and have been authoritatively challenged for many years; so you cannot expect the rest of the world to forego forever the advantages of a valuable reform, merely on the strength of this questionable allegation of yours.﻿

In this section of the letter the bomb finally gets dropped. The statement attacks the fact that Hillel II in 358 A.D. created a fixed calendar for the Jexish people therefore making the moon no longer tied to the calendar. In place of it he instituted a fixed calculated luni-solar calendar that is still in use today.This further proves the calendars used today cannot be used to find worship days but only the Creators Calendar beaconed in the sky by his appointted light the Moon.

REFRENCE TAKEN FROM: The Jewish Encyclopedia and the Jewish book of knowledge pages 70 and 71

(c)   Contrary to you own claim, the rate of correspondence between the Jewish Sabbath and Christian days of rest, because of their permanency as to the day and date of the year, would increase rather than decrease under the reformed calendar.﻿

As a final appeal they state that if they compromise that the attendance of worship would increase and not decrease. This is a sly final attempt at trying to sweeten the deal for the hold outs to compromise. 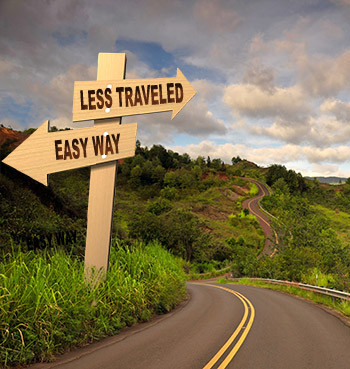 As deception becomes more prevelant and error is accpeted as truth by the deceived masses it will be critical to choose the path that is less traveled.

The messiah warned us all in the book of Matthew chapter 7:13-14

Two roads diverged in a wood, and I- I took the one less traveled by, And it has made all the difference.

The scenario that is ahead of us all is 2 options regardless of the World Calendar being put in place or not. Mankind is faced with accepting the truth of the Creators Calendar and appointted times of worship or folling the beast Calendar. As the coming years approach with oppurtune intervals for the World Calendar to be implemented each individual person must vigilant and on guard of the coming deception. If put in place the World calendar would be the final step needed on a calendarization﻿ level to unify the world on one calendar scheme. Satans false time keeping principals then would be spread world wide. At that point in time if Sunday Law legislation was implemented then the law could be universally carried out worldwide.

It is imperrative that all true followers of YAHUWAH resist and denounce this coming deception to the bitter end. All must study dilligently to fullyunderstand the eternal implications of following error or standing for truth. 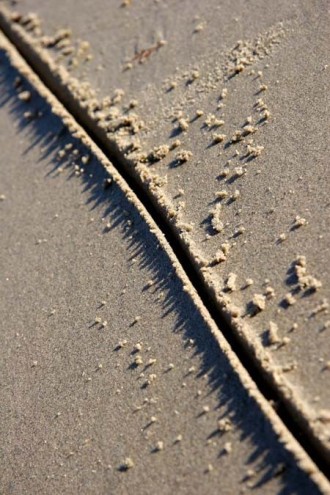 In closing as many in the near future will be wondering after the beast and receiving the mark the line will have been firmly drawn in the sand either you will have chosen to serve the Creator YAHUWAH or you will have chosen to believe a lie which will cost you eternal life. The signs that were prohecied by the prophets of old and the Messiah himself are being fulfilled before our very eyes. The literal words of Matthew chapter 24 are being fulfilled today all one needs to do is open their eyes and see. It is imperrative that we follow the Creators calendar, resist spiritual Babylon, and false worship which leads to the mark. While their is still time to act now is the accepted time to restore the Creators Calendar, appointed times, new moons, and sabbaths. We all have have a choice to make in life follow truth or lies the scripture tells the right path will you follow it today?