History from ancient times all the way up to our generation now has shown essential oils being used for natural healing. The Egyptians, Greeks, and the Romans very notably used them for medical purposes and healing the sick. Above all ancient cultures and people that used essential oils for healing the most well documented source of essential oils use is recorded in the scripture. From the beginning of Creation Master Yahuwah knew what man needed for healing and it is recoreded in Genesis Chapter 1....

Bereshith 1:29 And Elohim said, Behold, I have given you every herb bearing seed, which is upon the face of all the earth, and every tree, in the which is the fruit of a tree yielding seed; to you it shall be for meat. 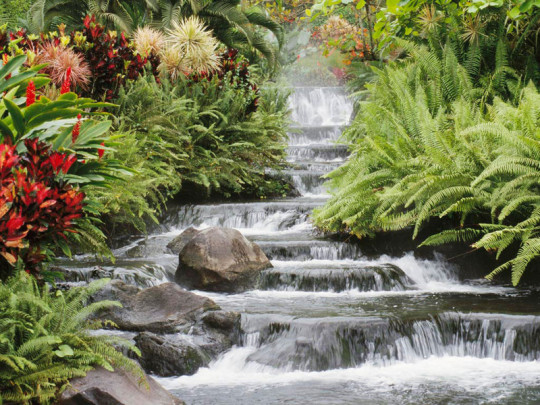 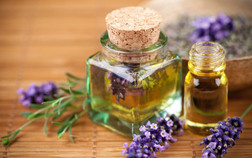 Essential oils were used in scripture in many different ways. They were used for annointing, as part of worship service to Elohim, for healing the sick, and etc. to the point that some oils were practically used daily. The fact we have modern medicine in this last generation does not mean we are more advanced at healing sickness. The ancient people knew how to use essential oils for healing and knew how to use them way better than we do in modern day in the humble opinion of the ministry. We have much to relearn from the past generations before us. 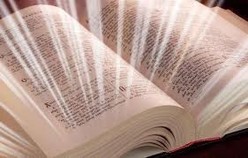 Loud Cry Ministries fully accepts this new light and weight of evidence given from scripture that essential oils should be for healing and will gladly walk in this new found light of truth. For those looking at scripture to be a guide for light on the subject as well the ministry has put together some stories from scirpture in this article below. These are just some of the most notable stories from the old covenant and the renewed covenant. We encourage you to not just stop here but search the pages of scripture as that they are full of the use of essential oils and many more accounts of their use.

SOME ESSENTIAL OILS USE RECORDED IN THE OLD AND RENEWED COVENANT 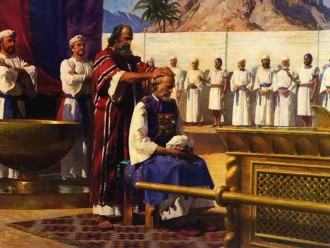 To Begin with one of the most notable uses of essential oils to the ministry is when Moseh (Moses) annoitted Aharon (Aaron) and his sons to serve before Master Yahuwah in the Tabernacle. This was not an act that the people of Ysrael came up with but was a direct command to do so by Elohim before the people. This very special and profound moment is recorded in Exodus...

Shemoth 30:30 And thou shalt anoint Aharon and his sons, and consecrate them, that they may minister unto me in the priest's office.
(Note: Scripture taken from the KJV bible with the Holy Names and Titles restored with respect to the Word and the Most High.) 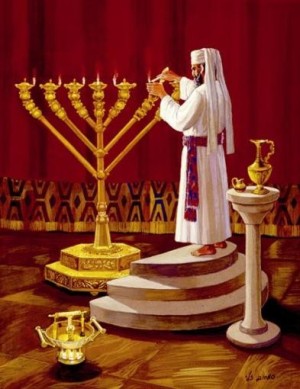 As part of worship service to Elohim the children of Ysrael were commanded to construct many different items for the tabernacle. One of these instruments of worship service was a 7 branch candlestick called the menorah was made as instructed by Master Yahuwah in Shemoth (Exodus) Chapter 25:31-37 and it was to burn before the most High. It was the duty of Aharon and his sons to tend to it and keep it burning. In Chapter 27:20-21 details out how this lamp was to be used and what essential oil was to be burnt in the lamp for service to the Most High....

Shemoth 27:20-21  And thou shalt command the children of Ysrael, that they bring thee pure oil olive beaten for the light, to cause the lamp to burn always. In the tabernacle of the congregation without the vail, which is before the testimony, Aharon and his sons shall order it from evening to morning before Yahuwah: it shall be a statute for ever unto their generations on the behalf of the children of Ysrael. 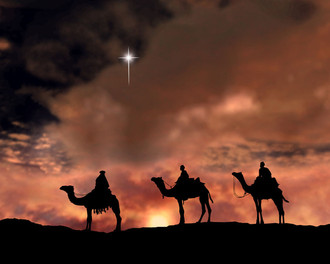 Moving forward to the references from the renewed covenant one of the most memorable to many people and well noted is the story of the wise men from the east who came to honor Messiah Yahushua. They brought three of the most exspensive and precious gifts of their time. Those 3 gifts were Frankincense, Myrrh and gold. Even in our generation today these three itmes are still of great value and cost. The two essentail oils Frankincense and Myrrh are some of the most sought after essential oils period. They are some of the hardest to find oils as well. It is only fitting that they brought these to Messiah as that they were one of the greatest treasures that a mortal man could offer the Son of the Most High Yahuwah while here on earth. 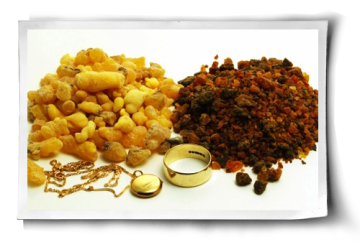 In the book of Mattithyahu (Matthew) in the second chapter of the book we find in the account of the story where that the wise men arrived at the home of Messiah Yahushua and presented him with these precious gifts....

Mattithyahu 2:11  And when they were come into the house, they saw the young child with Miryam his mother, and fell down, and worshipped him: and when they had opened their treasures, they presented unto him gifts; gold, and frankincense, and myrrh. 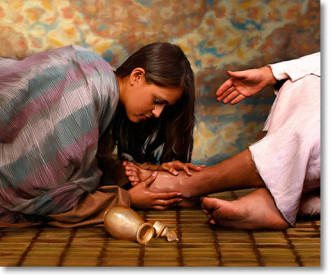 A powerful story of love and compassion is detailed out in Mattithyahu (Matthew) Chapter 26 where that a woman came and annointted Messiah. This a well know account from scripture for many but what is missed is that fragrant essentail oil was the type of oil that used to annoit him.

Mattithyahu 26:6-13  Now when Yahushua was in Beyth Anyah, in the house of Shim'on the leper, There came unto him a woman having an alabaster box of very precious ointment, and poured it on his head, as he sat at meat. But when his disciples saw it, they had indignation, saying, To what purpose is this waste? For this ointment might have been sold for much, and given to the poor. When Yahushua understood it, he said unto them, Why trouble ye the woman? for she hath wrought a good work upon me. For ye have the poor always with you; but me ye have not always. For in that she hath poured this ointment on my body, she did it for my burial. Verily I say unto you, Wheresoever this gospel shall be preached in the whole world, there shall also this, that this woman hath done, be told for a memorial of her. 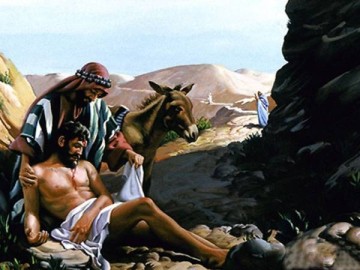 In the book of Luqas (Luke) is recorded one of the many parables that Messiah Yahushua used to teach rightousness to those who sought it and for those who still do in our generation as well. The story of the good Shomeronite (Samaritan) is a timeless classic that many people speak of often. Not only does this story teach compassion to be shown unto all humanity regardless of race or color and etc but it also shows what they used for healing as well. Below is the entire account of the story...

Luqas 10:30-37  And Yahushua answering said, A certain man went down from Yerusalem to Yericho, and fell among thieves, which stripped him of his raiment, and wounded him, and departed, leaving him half dead. And by chance there came down a certain kohen that way: and when he saw him, he passed by on the other side. And likewise a Lewite, when he was at the place, came and looked on him, and passed by on the other side. But a certain Samaritan, as he journeyed, came where he was: and when he saw him, he had compassion on him, And went to him, and bound up his wounds, pouring in oil and wine, and set him on his own beast, and brought him to an inn, and took care of him. And on the morrow when he departed, he took out two pence, and gave them to the host, and said unto him, Take care of him; and whatsoever thou spendest more, when I come again, I will repay thee. Which now of these three, thinkest thou, was neighbour unto him that fell among the thieves? And he said, He that shewed mercy on him. Then said Yahushua unto him, Go, and do thou likewise.
(Note: Scripture taken from the KJV bible with the Holy Names and Titles restored with respect to the Word and the Most High.)

As can be seen from the account that the merciful Shomeronite used oil and wine to help the mans wounds. This was the practice of the ancient people to use oils for clenasing of wounds as well as for healing them. 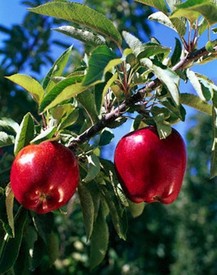 As a final example from the renewed covenant in this article recorded in the scripture in the book of Hazon (Revelation) Chapter 22 it is written...

Hazon 22:1-2  And he shewed me a pure river of water of life, clear as crystal, proceeding out of the throne of Elohim and of the Lamb. In the midst of the street of it, and on either side of the river, was there the tree of life, which bare twelve manner of fruits, and yielded her fruit every month: and the leaves of the tree were for the healing of the nations.

What a wonderful day that will be when we will be in the presence of the Most High and have the natural means that he gave us to heal ourselves. We here at the ministry encourage you to search diligently the pages of scripture as that they are full of knowledge of ancient healing using essential oils. We all have to make a decision will we walk in the old paths or walk in sin and disobediance. That is a question we will all have to ask ourselves individually but the scripture holds a great wealth of testimony of how they sought out healing.